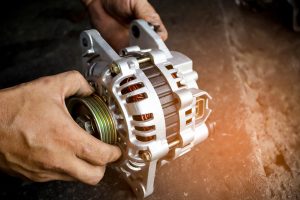 Many people think that their vehicle’s electrical power comes solely from its battery, but the alternator is responsible for producing the majority of a running vehicle’s electricity. Windshield wipers, headlights, radio, and other electronic components rely on the alternator to generate the power needed to operate. The battery, on the other hand, is used for starting the vehicle and provides power when the engine isn’t running.

What is an Alternator?

The alternator is part of the automotive charging system, made up of three primary components: the battery, the voltage regulator, and the alternator. An alternator is in essence a generator with the function of distributing electricity to the vehicle and recharging the battery. The alternator converts the rotational mechanical energy from the engine into the electrical energy needed by a vehicle’s components. When a vehicle’s engine is running, it powers a drive belt (or serpentine belt) that is connected to the alternator using a pulley. The pulley turns the alternator’s rotor shaft, spinning a set of magnets around a coil. The spinning magnets generate alternating current (AC) around the coil, which is then channeled to the rectifier. The rectifier is responsible for converting the alternating current (AC) into direct current (DC), the power used by a vehicle’s electrical components. 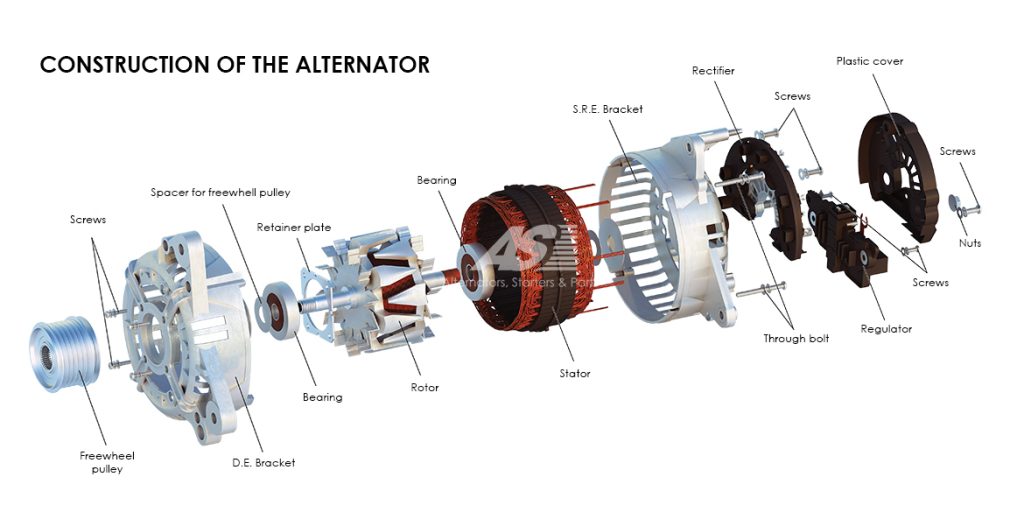 Parts of an Alternator

Alternators have a variety of parts that allow them to operate efficiently and deliver the appropriate amount of power to the correct component. Here are a couple of the essential parts and their purpose:

Stator – A set of stationary wiring, precisely spaced in order to work with the rotor to generate an alternating current.

Rotor – A spinning cylindrical piece containing magnets that is housed inside the stator. The movement of the magnets past the wiring is what creates electricity.

Voltage Regulator – An electronic component responsible for keeping the charging system voltage within a specified range.

Rectifier – A set of diodes that converts the alternating current (AC) from the stator into direct current (DC) usable by the vehicle’s electrical components. The diodes also allow current to flow in only one direction, preventing it from flowing backwards.

6 Signs of a Failing Alternator

Alternators can last the life of a vehicle, but there are a number of issues that can arise from poor treatment and lack of proper maintenance. Understanding what causes these problems will help you in identifying and fixing them in a timely manner.

A failing alternator will provide inconsistent voltage, resulting in flickering or other erratic behavior from headlights and other components. Headlights randomly going from bright to dim or vice-versa is an indicator of some sort of malfunction in the charging system.

Batteries have a lifetime that, once exceeded, can cause them to no longer work. Batteries can also be depleted when headlights are left on overnight, for example. The sign of  a deteriorating alternator comes when your battery does not charge while the engine is running. A way to tell if the issue is with the battery or the alternator is to see what happens after you jump-start the vehicle. If the vehicle starts and continues running, the battery may need to be replaced soon. If the vehicle starts and then dies again shortly after, then the alternator is not getting enough power to the battery.

If the electrical components of your vehicle do not receive the correct amount of power, they will work less efficiently or not at all. Windows taking abnormally long to roll up or down, seat warmers heating slowly, and instrument cluster malfunctions are all signs of a failing alternator.

A growling or whining noise from under the hood could be an indicator of alternator trouble. These sounds occur when the drive belt turning the alternator’s pulley is misaligned or when the bearings that spin the rotor shaft go bad.

The battery warning light does not mean that the issue is battery-specific, but rather with the vehicle’s charging system. A failing alternator is unable to stay within the specified voltage parameters, resulting in insufficient or excess voltage. Any voltage outside of the desired range will illuminate the battery light on the dashboard. The dash light may flicker on and off as the voltage fluctuates in and out of the appropriate range.

The smell of burning rubber may be an indicator of wear on an alternator. As the drive belt wears out over time from constant tension and friction, it can begin to degrade and emit a smell of burning rubber as it is exposed to the heat of the engine. A seized alternator pulley bearing will also cause an odor of burning rubber as the belt rubs the seized pulley when the engine is on. Another cause of foul odors comes from frayed or damaged wires heating up to unsafe temperatures. This is a result of either the alternator pushing too much electricity through the wires, or damaged wires creating resistance.

Alternator failure can leave your vehicle inoperable, so it is important to be on top of maintenance and be on the lookout for signs of wear on your alternator. Common issues with alternators include bearing failure, damaged regulators/rectifiers, bad belts, worn brushes, and over heating. It is also important to make sure the your battery is good, as a bad battery can ruin your alternator. On the other hand, a good battery can disguise some alternator problems, so be sure to check your vehicle’s entire charging system regularly. Proper maintenance can be extremely helpful in preventing alternator failure.