Caterpillar Inc. is the world’s leading manufacturer of construction and mining equipment, diesel and natural gas engines, industrial gas turbines, and diesel-electric locomotives. Officially founded in 1925 as a result of a merger of Holt Manufacturing Company and C. L. Best Machinery, Caterpillar’s history began sometime before that.

Benjamin Holt’s company produced and sold combine harvesters & wheeled steam tractors to farmers in the San Joaquin River Valley in Northern California. The geography of the area made it tough for Holt’s machines to operate, as the heavy equipment would get stuck in the soggy peat soil. After some development, Holt decided to remove the rear wheel from a steam tractor and implement a track system he had designed. Holt’s first tracked machine, known as No. 77, was tested on Thanksgiving Day 1904. 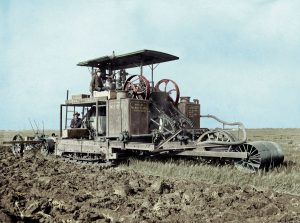 It wasn’t until a year later that the new technology would receive its iconic name. During a later series of tests in March of 1905, Benjamin Holt, his nephew Pliny, and the company photographer, Charlie Clements, had come to observe. Noticing the machine’s lack of wheels and its creeping, undulating movements, Clements exclaimed that the machine looked like a “monster caterpillar”. The Caterpillar name would go on to become synonymous with earthmoving equipment for decades to come. 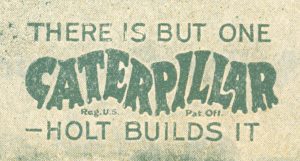 Caterpillar had also begun to shorten their name, labeling some of their machines with “CAT”, now the flagship brand in the Caterpillar portfolio. The CAT logo is an icon symbolizing hard work and grit, and can be found on skid steers, engines, mining excavators, boots, and much more as a sign of quality. With a reputation for innovation and reliability, Caterpillar’s flagship brand CAT serves a variety of industries, including construction and mining equipment, diesel and natural gas engines, industrial gas turbines, and diesel-electric locomotives. Iron Wing Sales carries a large variety of Caterpillar inventory. Browse our Caterpillar inventory for the parts you need today.