Function of an Engine Cooling System

Engine cooling systems are essential in maintaining the efficiency and longevity of a truck’s engine. Cooling systems serve to mitigate the heat generated by combustion as well as to increase efficiencies such as fuel economy and horsepower. Cooling systems not only keep engine components from overheating, but also allow them to heat up faster in cold conditions for better performance. The primary function of the cooling system is to ensure the engine is operating within an optimal temperature range. Almost all modern engines use a water-based cooling system, while a few still use air-cooling systems. In this post, we will go over the essential parts of an engine’s cooling system and their individual functions. 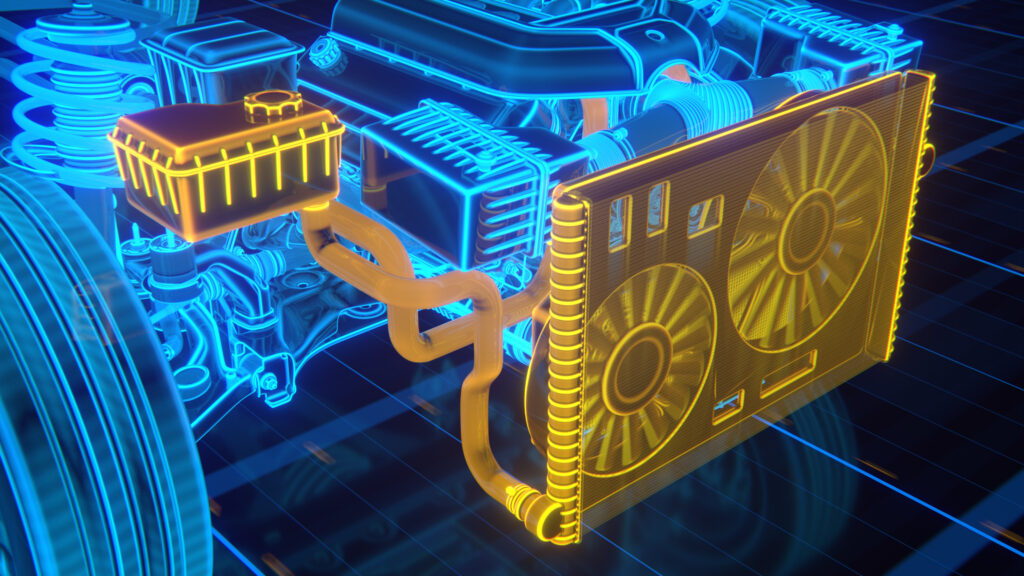 Parts of an Engine Cooling System

Cooling systems consist of a variety of parts working in conjunction to raise, lower, or maintain the engine temperature.

The coolant flowing through your engine’s cooling system consists of water and ethylene glycol (antifreeze), at a ratio of no less than 1:1. Coolant must be able to withstand high engine temperatures without boiling and also act as a lubricant. If there is too much water (greater than 50%), the coolant’s boiling point would be too low. Higher percentages of antifreeze (as much as 75%) can be used in climates with extremely low temperatures, though pure antifreeze would not work properly. For these reasons, a combination of both water and ethylene glycol is necessary.

Primarily made of aluminum, radiators consist of fins and tubes responsible for redirecting coolant and heat. Radiators serve to cool incoming fluid using the ambient temperature of the air. Hot coolant flows from the engine into the radiator and heat is dissipated into the outside air, whether from the radiator fans or incoming air from driving.

Radiators also have fans that serve to keep air flowing though the radiator while the vehicle is slowing down or stopped with the engine running. These fans are controlled by the vehicle’s computer and prevent the temperature from rising when the vehicle is at rest

Sufficiently complicated cooling systems have a fan drive or fan clutch which engages or disengages from the engine drive system in order to vary its speed as needed. The terms “fan drive” and “fan clutch” are generally interchangeable, but typically a fan clutch uses a friction plate design, while fan drive refers to a viscous design. Fan drives are responsible for keeping the engine with an optimal range of operating temperatures, usually defined by the manufacturer. The three basic types of fan drives are: on/off, two-speed, and variable speed.

More simple systems consist of radiator fans that are controlled by belts and pulleys, ultimately allowing the engine and belts to dictate the rotational speed of the fan. Engines without a fan drive turn the fan directly via a pulley and belt mounted to the engine’s crank shaft. This spins the fan at a constant speed, regardless of how much cooling is needed. This sacrifices energy that could be used for powering the drive train or other parts of the machine. Fan drives allow for higher efficiency, more performance and more optimized cooling.

While the parts listed above are the major systems involved in operating an engine’s cooling system, there are also a number of other parts involved as well. Hoses, gaskets, plugs, and other parts all help to accomplish the goal of moderating temperature. Heater cores and condensers will also be present for interior heating and cooling of the cab.

All of the parts of an engine’s cooling system work in harmony to maintain proper temperatures. For that reason, it is essential to practice proper maintenance and be on the lookout for symptoms of a failing part. High temperature displayed on the temperature gauge, smoke, low coolant levels could all be representative of larger problems. It is important to maintain your cooling system by properly inspecting it at regular intervals and replacing parts (such as the thermostat and water pump) as recommended by the manufacturer (whether by time or miles). With effective maintenance, your engine’s cooling system should keep your vehicle running smoothly.

Looking for replacement parts? Iron Wing Sales has a large inventory of Engine Cooling parts for both Heavy Duty Trucks and Heavy Equipment. All of our parts are In-Stock and Ready-to-Ship. Search our inventory by part #, category, or manufacturer. For further assistance, contact us at: sales@ironwingsales.com or 216-912-9089.

SIGN UP TO OUR NEWSLETTER
Copyright Iron Wing Sales. 2023