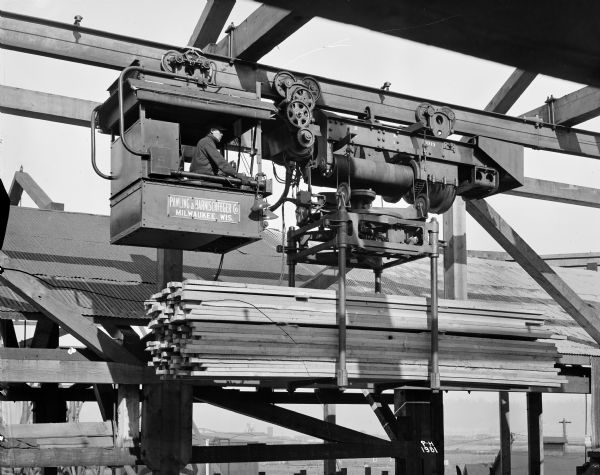 Alonzo Pawling and Henry Harnischfeger worked in the Whitehill Sewing Machine Company factory in the early 1880s. Amid concerns regarding the future of Whitehill’s business operations, Pawling left to start a gear machining and pattern making shop in 1883. In an effort to gain more expertise and capital, Pawling convinced Harnischfeger to join as his partner. The Pawling & Harnischfeger Machine and Pattern Shop opened on December 1, 1884 in Milwaukee, Wisconsin.

P&H quickly built a reputation for its high-quality parts and machinery, and would expand with the addition of a second-story within the first year, and then a third-story the year after that. Initially, P&H produced industrial machinery components and offered assembly service support to knitting machine manufacturers, brick makers, grain drying equipment manufacturers, and beer brewers.

In 1887, A.J. Shaw approached P&H with a unique opportunity. Shaw, who worked for the E.P. Allis Company (already a customer of P&H), was tasked with repairing a complex rope-driven traveling crane. Rather than fixing the crane, Shaw had an idea to replace the rope-driven functions with electric motors, three in total. Shaw presented his idea to P&H and together they created Shaw’s electric crane. This was P&H’s entrance to the overhead industrial crane market.

The new and improved crane was an immediate success upon going back into service in early 1888. Before long, P&H expanded their capabilities in order to build their own cranes and meet the increasing demand. In 1893, P&H began producing their own industrial-grade AC and DC motors in an effort to better control quality. Later that same year, a nationwide “bank panic” caused by the over-investment in railroads would cause a recession. This recession diminished the demand for cranes, requiring P&H to diversify their product line.

America was growing quickly at the end of the 19th century; roads, ports, mines, and factories were being rapidly developed. There was a growing demand for earth-moving machines, resulting in P&H’s decision to create their own line of digging machines.

Alonzo Pawling was suffering from a chronic illness and, as a result of his poor health, decided to sell his share of the company to Henry Harnischfeger in 1911. Pawling had but one request: to forever keep the “P&H” trademark on the company’s product moving forward. As the company had an established reputation of quality and service, Harnischfeger happily agreed. While the P&H logo was retained, the company was renamed to the Harnischfeger Corporation. Alonzo Pawling would pass away just three years later at the age of 57.

In the coming decades, Harnischfeger Corporation would go on to produce pavement cutters, trenching machines, power shovels, and convertible crawlers. These “8-in-1 convertibles” featured a platform with different mounting options, including: power shovel, dragline, construction hook crane, clamshell, pile-driver, magnet, “Skim-Scoop”, and back-filler. P&H machines were in service in the agriculture, mining, and construction industries across North and South America, as well as distant locations such as Mumbai, India.

In late 1929, the stock market crashed and demand for equipment began to falter. In 1930, co-founder Henry Harnischfeger passed away. His son, Walter Harnischfeger, would assume the leadership position for the next four decades. As demand for machinery waned, P&H began to offer diesel engines, prefabricated homes, and welding machines. Welding was a particularly big deal around this time, as P&H switched to all-welded machines rather than previous riveted designs. This change offered stronger, lighter machines that could carry larger payloads at a lower cost.

Later in the 1930s, P&H would adopt Ward-Leonard DC motor drive for application to P&H cranes and shovels. This replaced the large levers previously used to operate the machines, simplifying their use and increasing safety and productivity. The change also reduced the effort and strength required from operators to control the equipment.

As the United States entered World War II, the effects of the Great Depression began to diminish for P&H. They placed their focus on cranes, hoists, and digging machines for domestic industry and military application. P&H shovels supported the war with their great processing of iron ore, copper, coal, and more. After the war and through the 1950s and early 1960s, business was very good in all sectors and continued to expand.

By the mid 1960s, P&H’s diesel engines, welding machines, and prefabricated homes faced decreasing demand. These business units were sold in 1968 in order to further focus on core products: cranes, hoists, and shovel products. That same year, P&H introduced a new electric mining shovel, the 2800 Mark II. The first three 2800s went into service in a coal mine in Western Canada; twenty years later, each of the original machines continued to run long past 100,000 hours. The P&H 2800 series would go on to become the world’s best-selling, modern-era electric rope excavator, where it would remain until it was surpassed by the P&H 4100 series in 2010.

Through the rest of the 1960s and into the 1990s, P&H would make a number of acquisitions and product introductions to strengthen their core capabilities. By 1970, P&H was known as one of the best crane, shovel, and excavator producers in the world.

After the death of the founder’s grandson, Henry Harnischfeger, P&H was divided and sold in the coming years. In 1988, P&H’s mobile cranes brand integrated with PPM / North America through a licensing deal. PPM would eventually be acquired by Terex in 1995, transferring ownership of the mobile crane division. In 1994, P&H purchased Morris Mechanical Handling Limited, only to sell 80% of its material handling business by 1998 as a result of financial troubles. This material handling unit would become Morris Materials Handling.

Harnischfeger Corporation declared bankruptcy in 1999 and restructured in order to preserve their still-profitable surface mining business. P&H integrated with Joy Mining Machinery in 2000 and was renamed Joy Global shortly thereafter. In 2016, Joy Global closed its welding and heavy manufacturing divisions. In July that same year, Komatsu acquired Joy Global for $3.7 billion with plans to phase out the Joy Global corporate name. In early 2017, Komatsu assumed control of the P&H mining brand.

With legacy brands like P&H Crane, it can be extremely hard to find replacement parts. At Iron Wing Sales, we have a large inventory of P&H crane products to help you repair and maintain your machines. Simply search our website by part number or description. Have questions regarding our inventory? Contact us at: (216) 912-9089 or sales@ironwingsales.com