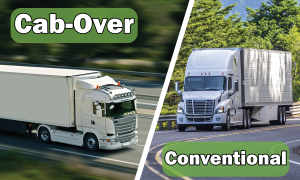 There are two varieties of trucks typically seen on the road: cab-over and conventional. Cab-over trucks (also called cab over engine) have a flat front end with the cab sitting above or in front of the truck’s front axle. Conventional trucks more resemble a car, with a hooded extension containing the engine in front of the cab, which is located behind the front axle. So, why have two extremely different designs to complete the same task? Well, there are a few reasons for this difference that will be discussed below.

There are a couple of answers to that question. The first of which is a limit to the combined length of the tractor and the trailer. Countries in the European Economic Area (EEA) are limited to a maximum combined length of 18.75 meters, or 61.5 feet. Though, there are different rules and tractor-trailer configurations that allow variances in this length. The US on the other hand has much more relaxed regulations. In fact, the Federal Highway Administration (FHWA) states that there is no overall length limit on tractor-trailer combinations, only a limit on trailer length. Compare the European regulations to the much more relaxed rules of the US, and it is easy to see why the length of the tractor must be minimized in order to maximize cargo space. Some US tractors can be over 20 feet long, while cab-overs can be less than 10 feet long.

Regulations aren’t the only reason for the ubiquity of cab-over trucks in Europe. Europe has far fewer owner operators than the US, meaning less hours on the road on average. For this reason, European drivers don’t need large sleeper cabins or living areas. Trucks in Europe are also limited to 80-90 kph, or around 50-55 mph. As a result of lighter loads and reduced speeds, European trucks don’t need overly large engines.

So now that we know why these design differences exist, let’s discuss the positives and negatives of a cab-over truck compared to a conventional truck:

The shorter wheelbase of a cab-over tractor allows for much more responsive handling. This is especially important as European roads can be winding and have narrower lanes when compared to those in the US. This also allows increased maneuverability for tight turns and swings when approaching a dock.

Cab over trucks have a clear advantage in visibility out of the windshield. The lack of hood extending in front of the cab allows the driver a much greater view of what’s in front of him. This visibility can be especially helpful when turning and navigating tight or treacherous routes. It also mitigates the risk of not seeing pedestrians or other hazards as they cross in front of the vehicle.

Cab-overs have the advantage of being able to tip the cab forward in order to expose the engine and components. This allows the truck to be serviced from ground level.

The reduced length allows cab-overs to fit in smaller parking spaces when not coupled to a trailer.

The positioning of the cab over the front axle results in a bumpier ride, as bumps and shocks are more directly transferred to the driver.

Cab-over’s flat front end and overall rectangular shape when coupled to a trailer are not especially aerodynamic. This is more of an issue in the United States, where drivers are often on long, straight highways facing winds and resistance at speed. This is a minor issue, but when compounded over all trucks in a fleet, the additional gas costs would add up.

Cab-overs typically require use of a ladder and some lateral movement in order to enter the cab, a more involved process compared to the few stairs used to enter a conventional truck.

While all modern vehicles undergo rigorous safety and crash testing, there are still some concerns when it comes to cab over engine trucks. The lack of a crumple zone leaves the windshield, and ultimately the driver, very close to the action in the event of a head-on collision. Another possible issue is that the windshield is more exposed to debris kicked up from the road.

Ultimately, cab over engine and conventional trucks can do the same jobs at about the same efficiency. There is an element of preference involved, but in Europe their use is more out of necessity. None of the positives or negatives mentioned are enough to qualify or disqualify cab-overs for use instead of conventional trucks. Instead, they are considerations to keep in mind.

Looking for heavy-duty truck parts? Look no further! Iron Wing Sales carries a large inventory of heavy-duty truck parts. Our parts are in-stock and ready to ship! Simply browse by category, or you can use our search function to sort by description, part number, or manufacturer. We also offer free shipping on qualifying orders >$100. Additional inquiries, contact us by email: sales@ironwingsales.com or by phone:(216) 912-9089