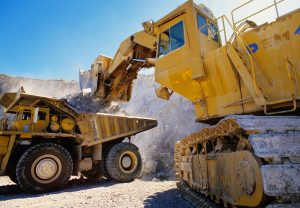 There are a variety of machines used in the mining industry to drill, blast, hoist, and haul materials. The machinery used depends on the material being extracted, the environment, and the method of mining. Before discussing the equipment most commonly used in mining operations, let’s discuss the different types of mining.

There are two main types of mining: surface and underground. Surface mining is done on the ground’s surface and accounts for more than two-thirds of the world’s yearly mineral production, and approximately 97% of non-fuel minerals. Surface mining can be done by open-pit mining, strip mining, quarrying, and other methods. Underground mining is done by tunneling into the earth and extracting minerals from a mine shaft. Types of underground mining include: room and pillar mining, retreat mining, blast mining, and more. Just like the machinery used, the type of mining also depends on a variety of factors, such as material and environment.

An assortment of heavy machinery is used throughout the mining process. Here are a few of the most common types of machinery used in the mining industry and their uses: 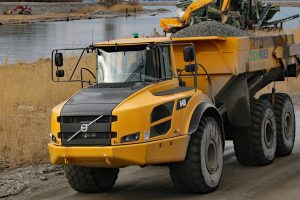 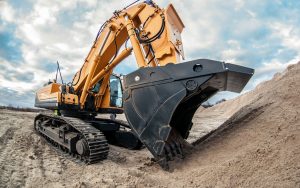 Also referred to as excavators, today’s mining shovels are hydraulically-operated evolutions of steam shovels from the past. Most mining shovels consist of a rotating cab that sits on top of a base with either tracks or wheels. An articulating arm holding the shovel connects to the cab and allows the machine to operate with minimal movement. These machines are useful for moving earth or mined material, digging, filling loaders, removing overburden (rock or dirt) from the surface, and transporting small amounts of mined material. These machines are used in surface mining applications. 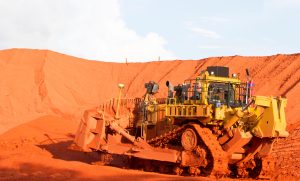 Mining dozers are large and powerful, capable of moving large amounts of material around a surface mining site. Dozers can have either tracks or wheels depending on the environment in which they will be used. The front blade can be swapped with additional attachments in order to change the functionality of the dozer. Uses of a mining dozer include pushing material in order to expose or maintain a mining site, raking the ground, removing plant matter from the ground, and more. 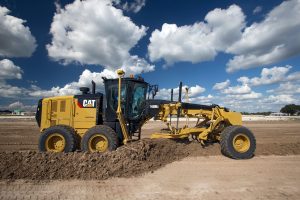 Mining sites tend to be off the beaten path and may not have surfaces flat enough to operate the equipment required in order to carry out the job. Motor graders mitigate this issue by creating and maintaining flat, smooth, well-drained haul roads in order to support the rest of the operation. Motor graders support the infrastructure of the whole surface mining operation, as they allow materials to be transported around and out of the mining area. 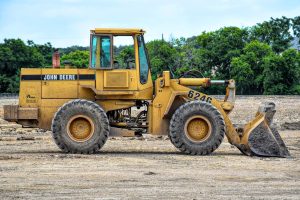 Ranging in size from compact to large, wheel loaders are used to pick up and move material across a surface mining site in order to load it into trucks. Larger loaders have larger buckets and in turn can carry larger loads. Larger capacity buckets allow for increased power and efficiency. It is important to match the size and capabilities of the wheel loader to the intended application and volume and density of materials. 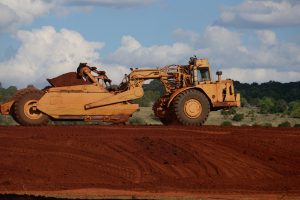 Scrapers are similar to graders, but instead of simply moving the material on the ground, they collect it in an attached hopper. The hopper can be raised or lowered using controls in the cab. When lowered to the ground, the edge of the hopper scrapes the ground, collecting material. Once the hopper is full, it is raised and the material can be transported to its deposit location, where the hopper tilts and opens in the rear in order to empty its load. Scrapers are used for selective mining, road building, and other surface mining operations. 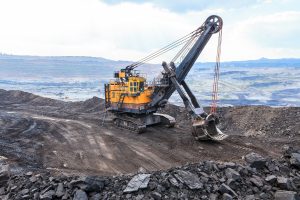 Similar in function to hydraulic mining shovels, electric rope shovels operate using a series of pulleys and ropes. Electric operation allows for the benefit of more efficient performance over time. This is especially practical in mining applications where machines are running for long periods of time. Just like hydraulic mining shovels, electric rope shovels are used for removing overburden, moving earth, transferring material into a loader, and more. 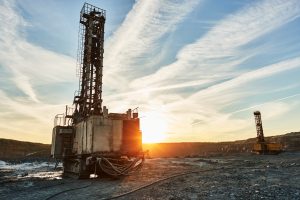 Rotary Drill Rigs are used in surface mining to create holes in the earth where explosive charges are placed for blasting open mines. As the drill bit rotates under pressure and pushes through the rock and soil, compressed air sends the debris back to the top of the drill in order to keep the bit clean. Holes created by rotary drill bits can vary in depth and diameter. Hammer or percussion rock drills penetrate the ground by repeatedly striking it with the bit. Compressed air clears dirt away so the bit can consistently strike new ground. Rock drills typically drill smaller holes than rotary drills.

Draglines are large excavators used in surface mining applications with a bucket at the end of a boom supported by ropes and wires. The bucket can be lowered and scraped along the ground in order to collect overburden or mined material. The bucket can then be repositioned in order to dump its contents in a specific location. Uses of draglines include moving large amounts of overburden, removing exposed material from strip mines, and cutting into high wall surfaces to remove material. 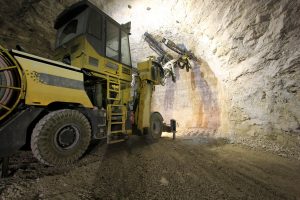 Equipment used for underground mining has certain size and emissions requirements in order to operate in enclosed spaces. These machines need to operate with the same power and efficiency as surface mining equipment, without producing emissions. The applications of underground machinery is largely the same as on the surface, though there are some differences: the aforementioned size and emissions constraints as well as the use of tunnels instead of roads. Other differences include the need to ventilate, reinforce, and fire-proof  the tunnels in order to keep them safe for workers.

At Iron Wing Sales, we have parts for all of your mining equipment needs. We carry a large inventory of genuine OEM and USA-made aftermarket parts. Our parts are in-stock and ready to ship now in order to help you minimize downtime. Search our inventory by part #, category, or manufacturer. For further assistance, contact us at: sales@ironwingsales.com or 216-912-9089.