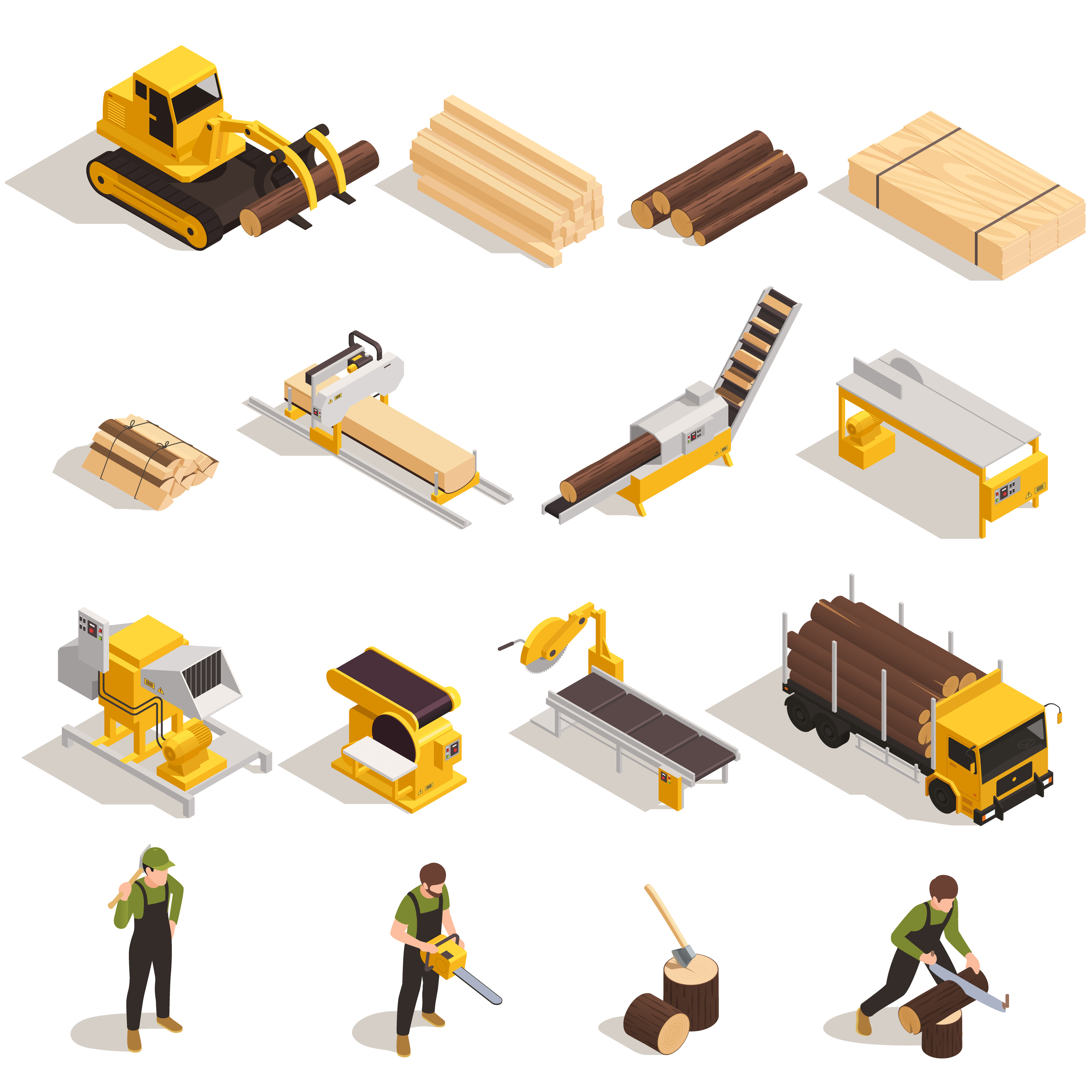 Foresters and loggers utilize many different pieces of equipment in order to cut and process trees. In this post we will discuss some of the basic types of equipment most commonly used in forestry and logging applications.

Wheeled feller-bunchers drive directly up to each tree in order to fell them, as the cutting head is mounted directly to the machine. Tracked feller-bunchers make use of an articulating boom with the cutting head mounted on the end, allowing them to clear out a 360° area around the machine before moving to a new area. This is also useful in stacking trees as they are cut down, operating much more efficiently than wheeled machines.

Delimbers are essential in forestry and logging work. Delimbers are used to remove the limbs from felled trees, making them easier to handle and transport off of the jobsite.

There are three basic methods for delimbing a tree: gate, flail, and pull-through. All three are landing-based, relatively low-cost, and most suitable in applications where the quality of the remaining wood is not a concern. 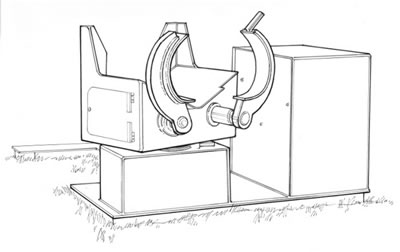 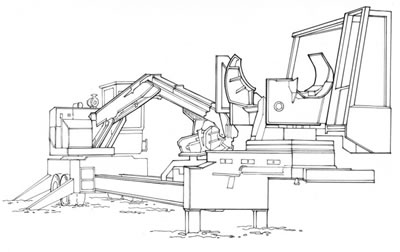 Flail delimbers consist of rotating drums with chains mounted to them. Flail delimbers are useful for dealing with smaller trees from dense stands with small limbs. The chains break off the limbs as trees are fed through the drum. Flails may be either self-feeding or require a loader or skidder to pull trees through. While the chains break and remove limbs, they also remove the bark from the tree. This can be useful when trying to achieve ‘clean’ chips (chips typically containing <1% bark content), which are used for making pulp and paper.

Delimber (right) feeding into a chipper

Log loaders are used for sorting, moving, and stacking cut logs. There are wheeled, tracked, and truck-mounted log loaders. Hydraulically operated grapples are used to grab and control logs as they are moved into piles or onto trucks.

There are a few different types of log loaders. Knuckleboom loaders have articulating booms with fast hydraulic systems, allowing them to quickly raise, lower, and rotate in order to accurately place logs. Knucklebooms can be wheeled, tracked, or truck-mounted. Wheeled loaders can also use a set of forks with a grapple n order to pick up and load large numbers of logs at once. Trailer-mounted loaders are boom type loaders attached directly to the log truck. Truck-mounted loaders are used for loading shortwood and decrease the payload that the attached truck can carry.

There are also different types of grapples can be used depending on material, log size, and number of logs carried at one time. 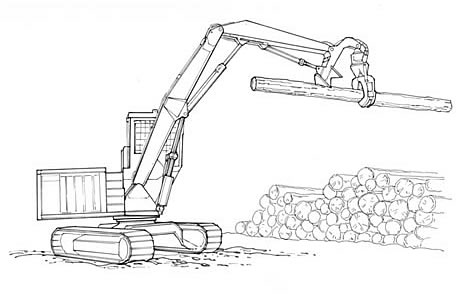 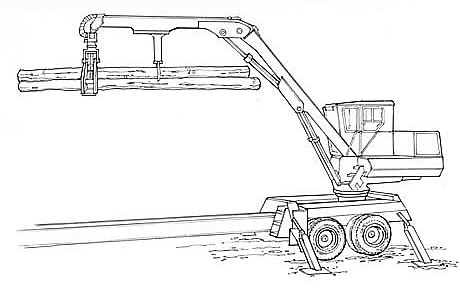 Skidders are used to drag material from the woods to landings or a roadside. Skidders can be either tracked or wheeled.

Like wheel skidders, track skidders also use grapples or cables to skid trees. They typically have a full dozer blade on the front end used to create roads and landings. Track skidders come in two styles: rigid track and flex track. Rigid tracked machines consist of a rigid frame supporting the tracks with no suspension. Flex tracked machines have independently suspended bogey wheels supporting the track. As a result of the suspension, flex tracked machines maintain greater contact with the ground and allow for greater traction on broken ground. Tracked skidders are usually used in applications where large loads need to be pulled up steeper slopes, or where a machine that can help build roads and landings is needed.

Skidders are equipped with either a grapple or a cable drum, and sometimes both. Grapples are capable of picking up more than one stem at a time. Grapples are attached to the skidder by an arch or boom, which provides lift and helps position the grapple. There are single arch, double arch, and swing booms. 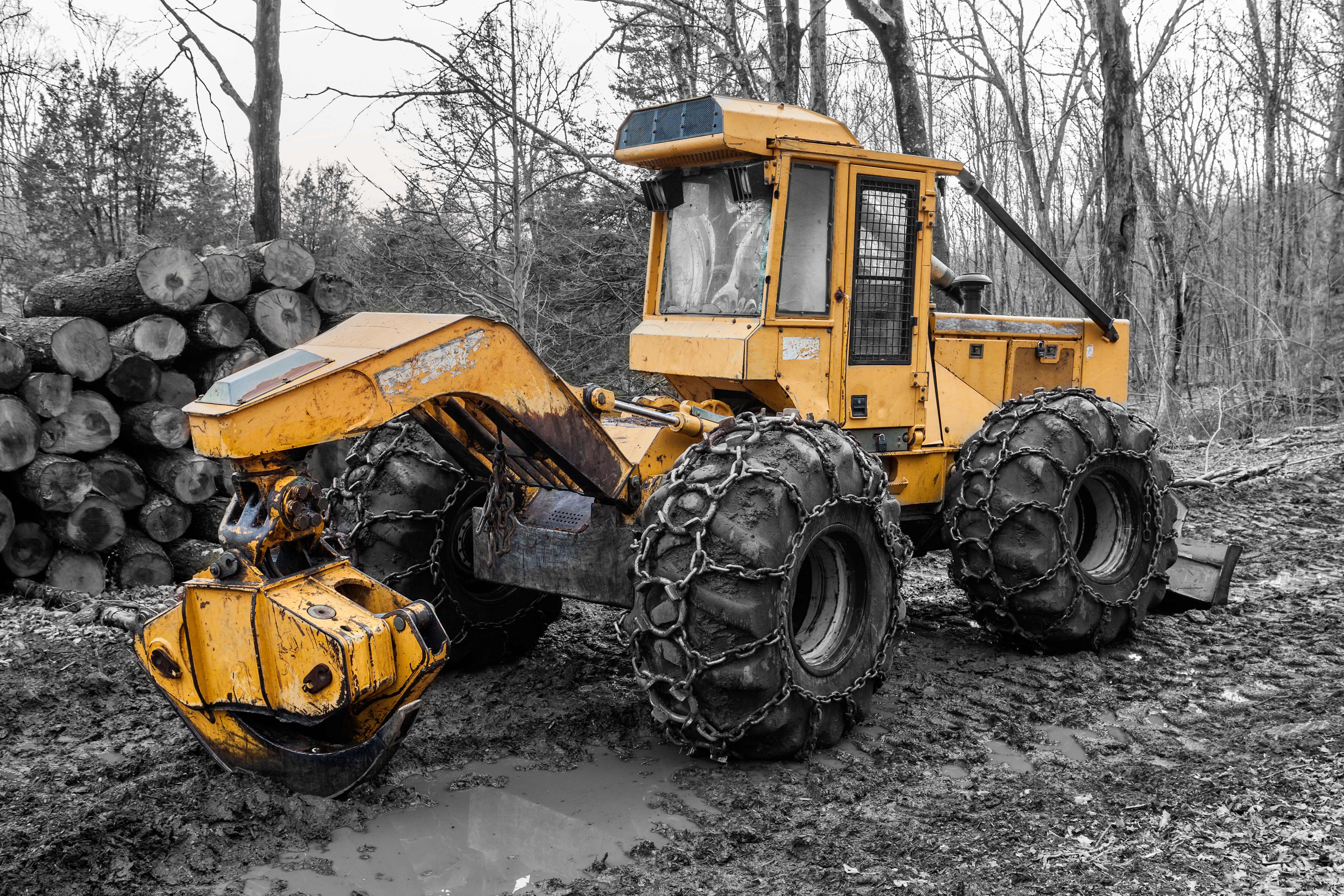 Forwarders are articulated machines consisting of a cab towing a log bunk. Forwarders can have up to eight wheels and many have a boom mounted grapple used for loading and unloading material. Different sizes of forwarders exist for hauling various log lengths and stem volumes. Forwards differ from skidders by elevating the trees before moving them, thus reducing the impact on the soil. 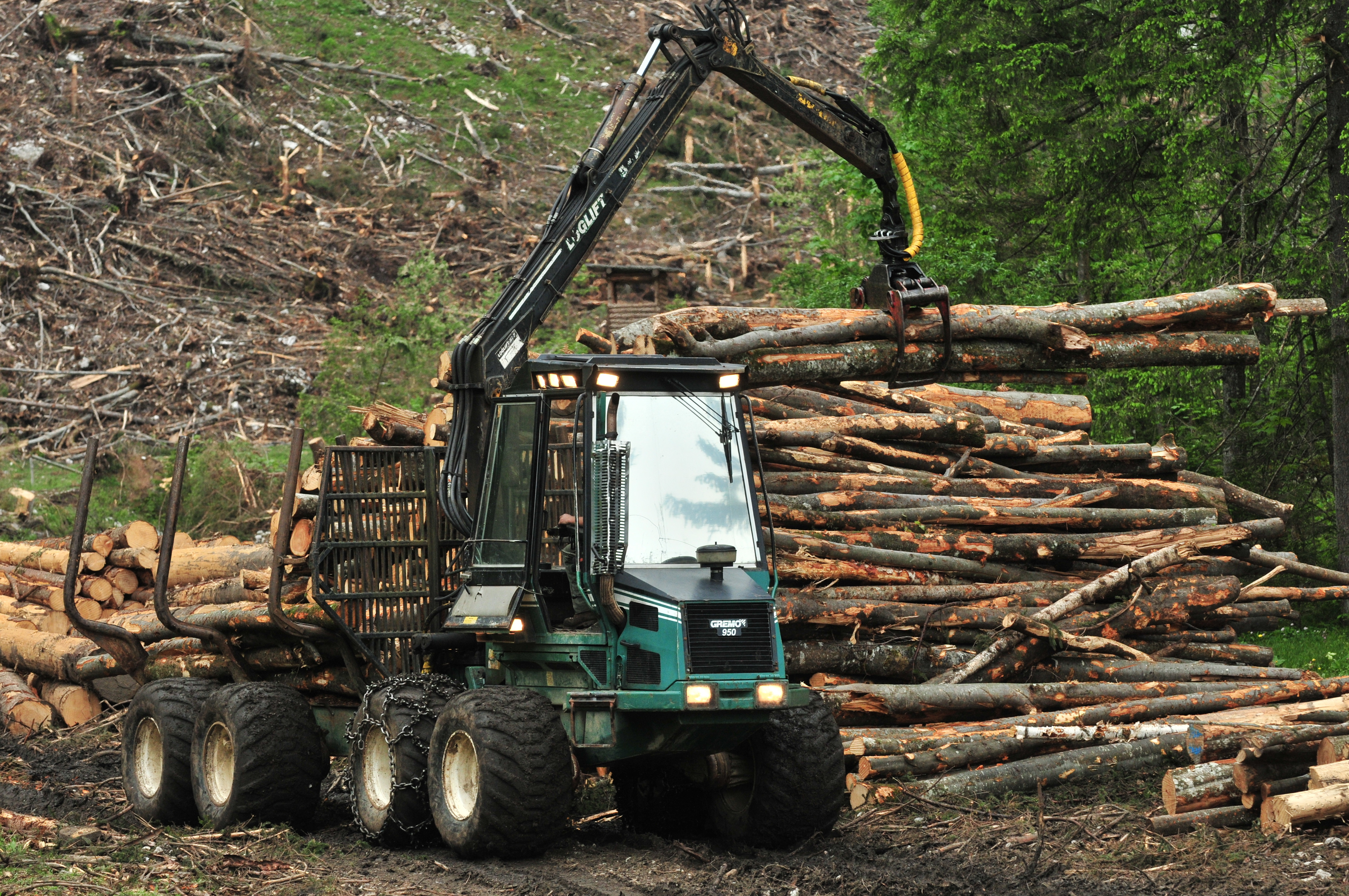 Mulchers are used to cut, chop, and grind vegetation into small particles that are typically left on-site as mulch. The main purpose of mulching is to lower the volume and vertical height of fuel, for a number of reasons ranging from controlling invasive species to aesthetic treatments. Fuel, in this case, is combustible biomass found in forests. In this case, fuel would be shrubs, branches, downed trees, and logs.

Mulchers can be standalone machines, or attachments mounted on a variety of chassis, such as: skid steers, excavators, farm tractors, wheeled-loaders, and dozers. Mulchers mounted on excavators or wheel loaders are capable of mulching standing trees. Those mounted on skid steers, tractors, and dozers are pushed through trees, and as the stems fall in front of the machine they are shredded. Mulchers come in two types: vertical shaft and horizontal shaft. 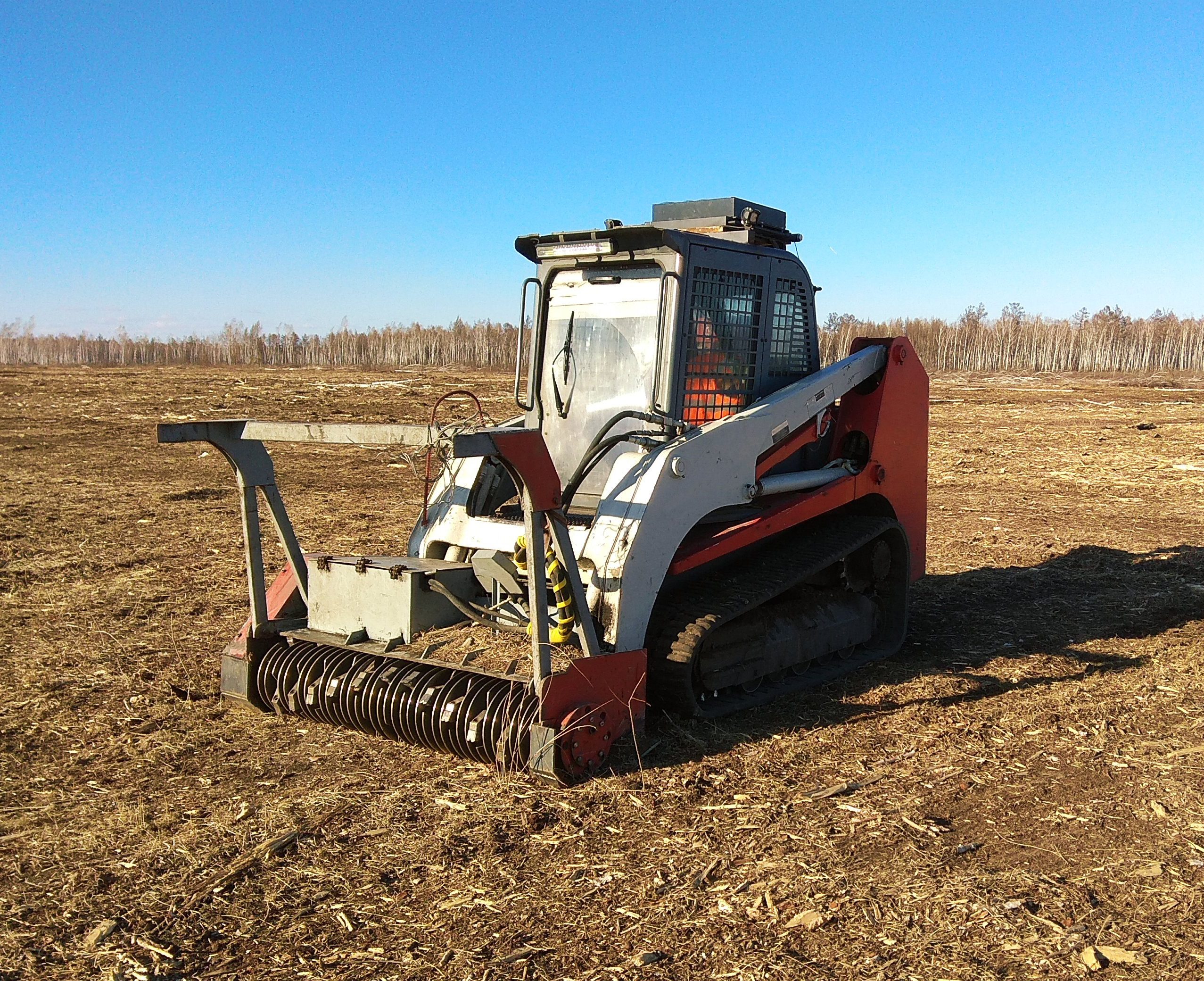 Chippers are used to reduce trees to uniform sized wood chips. There are many configurations of chippers, but common features of a chipper include: a feeding mechanism, a set of rotating knives (drum or disc mounted), an anvil, and a discharge chute. The chip size is determined by the distance from the anvil to the knives, feed speed, speed of the rotating disc or drum, and distance between the knives. Drum chippers consist of cutting teeth mounted on a rotating cylindrical drum, while disc style chippers have teeth mounted on a large steel disc. Some chippers have integrated delimbing/debarking functions, which is helpful in producing clean chips.

Chippers may be either self-propelled, stand alone, or trailer-mounted. Some chippers have loading arms and grapples for self-loading. 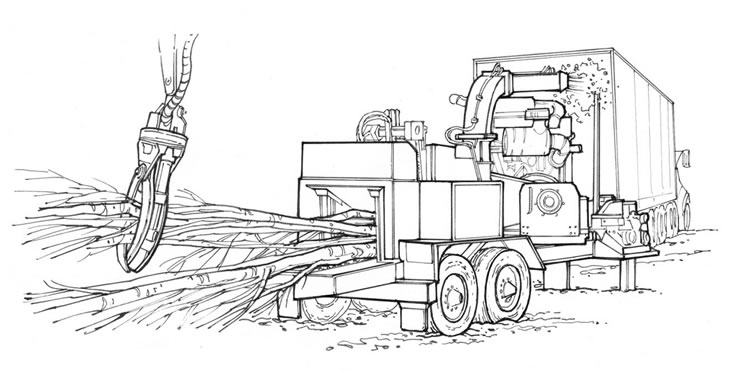 The machines in this post are just some of the most commonly used machines in forestry applications. For additional information on the machines mentioned, as well as others that were not mentioned, check out the U.S. Forest Service’s Forest Operations Equipment Catalog.

At Iron Wing Sales, we carry hard-to-find and No Longer Available parts for all of your forestry needs.  Our parts are in-stock and ready to ship now in order to help you minimize downtime. Take a look at our Agriculture & Forestry parts inventory, or search by part #, category, or manufacturer. For further assistance, contact us at: sales@ironwingsales.com or 216-912-9089.